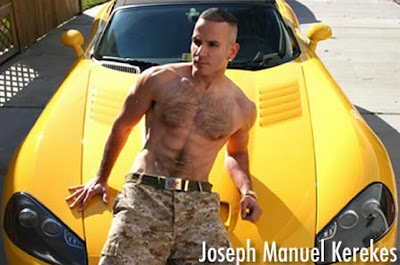 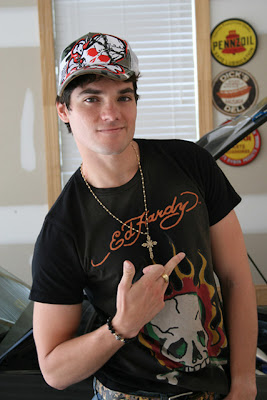 Harlow Raymond Cuadra, 25, and Joseph Manuel Kerekes, 33, both of 1028 Stratem Court, were arrested by Beach police about 10 a.m. on Virginia Beach Boulevard as they drove in their black BMW, according to Barry Taylor, a Beach attorney who represents Cuadra.

The two men, who operate Norfolk Gay Escorts and Norfolk Companions Inc., as well as at least two Web sites, have been suspects in the case since Beach police executed a search warrant at their home in February.

On Tuesday, they were taken to Virginia Beach police headquarters while investigators with the Pennsylvania State Police considered a host of charges against them relating to the slaying of Bryan C. Kocis of Dallas, Pa., on Jan. 24.

Someone killed Kocis, a producer of gay films and owner of Cobra Video, by cutting his throat. He was then stabbed 28 times and burned. His body was discovered by firefighters who were called to a structural fire.

Pennsylvania authorities on Tuesday unveiled a 54-page document that spells out the charges and evidence against the two men. Besides criminal homicide, Cuadra and Kerekes may be charged with robbery, burglary, arson, theft, tampering with evidence and conspiracy, Taylor said.

After the arrest Tuesday, Beach police executed another search warrant at the Stratem Court residence.

Police are investigating whether to charge the men with violating Virginia’s Racketeer Influenced and Corrupt Organizations Act, conspiracy to launder money, and conspiracy to receive money from the earnings of male or female prostitutes, according to the search warrant.

Taylor said Tuesday afternoon that the detailed document and affidavit will take some time to digest.

“We are trying to sort through it and see how strong the evidence really is,” Taylor said.

Kerekes is being represented by a Pennsylvania attorney, Taylor said.

The Pennsylvania document details a complicated case against the two men, tied together by a maze of e-mails.

Most of the e-mails are between the victim and a person named “Danny Moilin. “

In an affidavit, Pennsylvania authorities claim that Moilin is an alias of Cuadra’s that was used to set up the victim.

The affidavit claims that the motive for the crime was money.

Cuadra and Kerekes, the affidavit says, believed Kocis to be their main rival in the lucrative gay pornography business, and they wanted Kocis out of the way so they could form a relationship with Kocis’ main pornography star, Sean Lockhart, who is known in the gay film industry as Brent Corrigan.

The affidavit says that extensive electronic communication took place between Moilin and Kocis just prior to Kocis’ death. The communication was filtered through multiple addresses in an attempt to disguise its origination point.

It also says that a vehicle matching the description of the vehicle seen leaving the scene was rented by Cuadra in Virginia in the days leading up to the killing.

The affidavit says that Cuadra and Kerekes bought a knife at a Beach gun shop prior to the slaying. Virginian Pilot